Aconitase (aconitate hydratase; EC 4.2.1.3) is an iron-sulfur protein containing [Fe²cluster that catalyzes the stereospecific isomerization of citrate to isocitrate via cis-aconitate in the tricarboxylic acid cycle, a non-redox-active process. Tissue contains two aconitases, a mitochondrial (m-) and a cytosolic (c-) aconitase. They are related, but distinctly different enzymes and are coded for on different chromosomes. Loss of aconitase activity in cells or other biological samples treated with pro-oxidants has been interpreted as a measure of oxidative damage. Assay Genie's Aconitase Assay Kit is a highly sensitive, simple, direct and HTS-ready colorimetric assay for measuring Aconitase activity in biological samples. In the assay, citrate is converted by aconitase into isocitrate, which is further processed resulting in a product that converts a nearly colorless probe into an intensely colored form with a ax at 450nm. 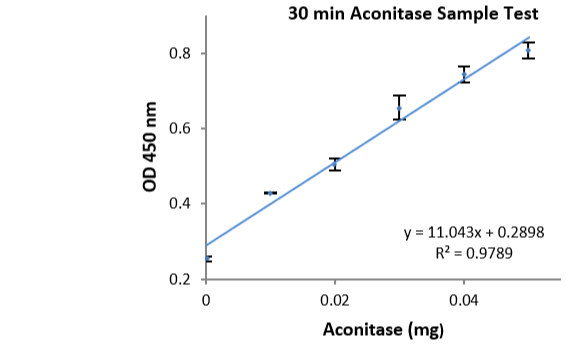 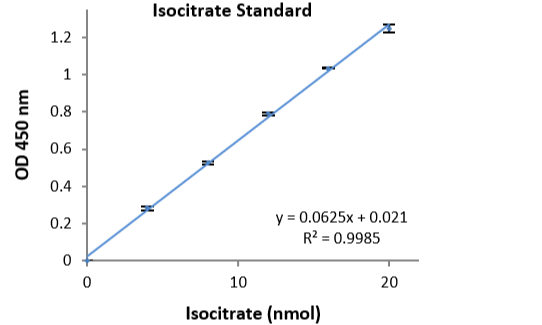 Unit definition: One unit of Aconitase is the amount of enzyme that will isomerize 1.0µmol of Citrate to Isocitrate per min at pH 7.4 at 25 °C.

MSRP:
Now: €684
Was:
Lipase Activity Assay - InformationAssay Genie's Lipase Assay (Colorimetric) is based on an improved dimercaptopropanol tributyrate (BALB) method, in which SH groups formed from lipase cleavage of...
BA0052

MSRP:
Now: €588
Was:
Aconitase Assay Kit - InformationAssay Genie's aconitase assay measures the isocitrate generated as a product of the aconitase reaction. The isocitrate is then oxidized producing NADPH and the...
BA0070

MSRP:
Now: €588
Was:
Aconitase Assay Kit - InformationAssay Genie's aconitase assay measures the isocitrate generated as a product of the aconitase reaction. The isocitrate is then oxidized producing NADPH and the...
BA0070

MSRP:
Now: €619
Was:
Citrate Colorimetric/Fluorometric Assay Kit Citric acid (HOOC-CHC(-OH)(-COOH)-CHCOOH) is a key intermediate in the TCA cycle which occurs in mitochondria. It is...
BN00879

MSRP:
Now: €721
Was:
NAD/NADH Quantitation Colorimetric Kit Assay of nicotinamide nucleotides is of continual interest in the studies of energy transforming and redox state of cells...
BN00603

MSRP:
Now: €619
Was:
Alpha-Ketoglutarate Colorimetric/Fluorometric Assay Kit Ketoglutarate (KG) is a key intermediate in the Krebs cycle, coming after isocitrate and before succinyl...
BN00901

MSRP:
Now: €565
Was:
Malate Colorimetric Assay Kit L(-) Malate is a TCA cycle intermediate. It plays an important role in the Calvin cycle during carbon fixation in plants. In lower...
BN00861

MSRP:
Now: €673
Was:
Glutamine Colorimetric Assay Kit Glutamine (Gln) is one of the most abundant amino acids containing an uncharged amide as a side chain. It is synthesized via...
BN00786

MSRP:
Now: €841
Was:
Direct Glucose Uptake Assay Kit    Glucose uptake is one of the key processes for cellular glucose metabolism. The study of glucose uptake can provide important information for...
BN01098