Cathepsin E (CTSE, EC: 3.4.23.34) is a gastric aspartyl protease that functions as a disulfide-linked homodimer. This protease has a specificity similar to that of pepsin A and cathepsin D. It is an intracellular proteinase that is found in highest concentration on the surface of epithelial mucus-producing cells of the stomach. It is the first aspartic proteinase expressed in the fetal stomach and is found in more than half of the gastric cancers. Assay Genie's Cathepsin E Inhibitor Screening Kit utilizes the ability of Cathepsin E to cleave a synthetic MCA-based peptide substrate to release free MCA, which can be easily quantified using a fluorometer or fluorescence microplate reader. In the presence of a Cathepsin E-specific inhibitor, the cleavage of the substrate is reduced/abolished resulting in decrease or total loss of the MCA fluorescence. This simple and high-throughput adaptable assay kit can be used to screen/study/characterize the potential inhibitors of Cathepsin E. 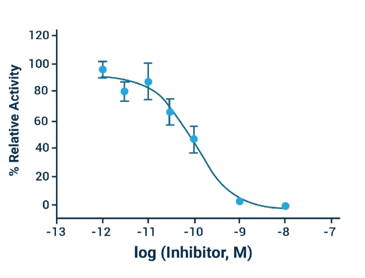 MSRP:
Now: €715
Was:
Cathepsin D Inhibitor Screening Kit (Fluorometric) Apoptosis can be mediated by mechanisms other than the traditional caspase-mediated cleavage cascade. There...
BN00428

MSRP:
Now: €715
Was:
Cathepsin S Inhibitor Screening Kit (Fluorometric) Cathepsin S (CTSS, EC 3.4.22.27) is a lysosomal cysteine proteinase that is suggested to participate in the...
BN00429

MSRP:
Now: €613
Was:
Deubiquitinase Activity Assay Kit (Fluorometric) Cell activity and viability is tightly regulated by controlling the production and degradation of the thousands...
BN00721

MSRP:
Now: €392
Was:
Beta-Galactosidase Staining Kit The LacZ gene from E. coli is one of the most commonly used reporter genes for testing the efficiency of expression vector...
BN01018