Glutathione is the principal intracellular low-molecular-weight thiol that plays a critical role in the cellular defense against oxidative and nitrosative stress in mammalian cells. Diminished glutathione levels have been observed in the early stages of apoptosis. Assay Genie's Glutathione Detection Kit provides a simple in vitro assay for detection of total glutathione changes in apoptosis and other samples. The assay utilizes monochlorobimane (MCB), a dye that appears to form an adduct exclusively with glutathione. The unbound MCB is almost nonfluorescent, whereas the dye fluoresces blue (Ex./Em. = 380nm/461nm) when bound to glutathione of reduced or oxidized form. The reaction is catalyzed by glutathione S-transferase. Thus, the amount of total glutathione can be easily detected using a fluorometer or a 96-well fluorometric plate reader. 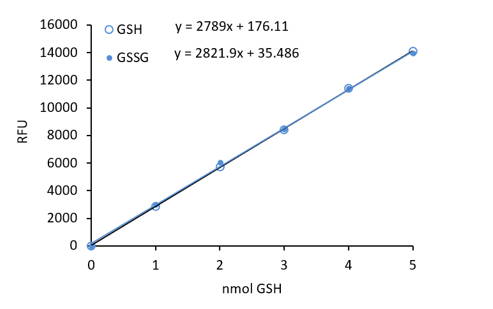 MSRP:
Now: €636
Was:
Isocitrate Assay Kit ISOCITRATE (ISOCITRIC ACID) is a substrate in the citric acid (TCA) cycle. Isocitrate is formed by the isomerization of citrate catalyzed by the enzyme aconitase...
BA0103