Glutathione S-transferase (GST) is a family of enzymes that play an important role in detoxification of xenobiotics. GST catalyzes the formation of the thiol group of glutathione to electrophilic xenobiotics. It utilizes glutathione to scavenge potentially toxic compounds including those produced as a result of oxidative stress and is part of the defense mechanism against the mutagenic, carcinogenic and toxic effects of such compounds. The GST Fluorometric Activity Assay Kit provides a simple, fluorescence-based in vitro assay for detecting the GST activity using fluorescence plate reader. The assay utilizes monochlorobimane (MCB), a dye that reacts with glutathione. The free form of MCB is almost nonfluorescent, whereas the dye fluoresces blue (ex/em = 380/461 nm) when reacts with glutathione. GST catalyzes the MCB-glutathione reactions and the fluorescence levels are proportionally to the amounts of GST presence in the reaction. Thus, the GST level in samples can be easily detected using a fluorometer or a 96-well fluorometric plate reader. The kit can detect GST activity in crude cell lysate or purified protein fraction, and also quantitate GST-tagged fusion protein. Detects < 0.5 mU. 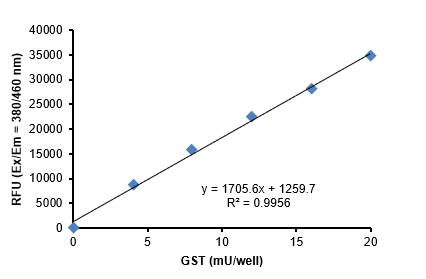 Fig. 1 Standard Calibration Curve of GST Measured by Fluorometry. Various amounts of Standard GST were incubated with GSH and MB according to the kit instructions. Fluorescence was measured at Ex/Em = 380/460 nm.