Isocitric acid (HOOC-CHOH-CH (-COOH)-CHCOOH) is an intermediate of the Krebs TCA cycle, positioned between citrate and keto-glutarate. It is the branch point from which the glyoxylate shunt operates in plants and lower organisms. Isocitrate is found in substantial concentrations in many fruits and vegetables as well as in foods produced from these raw materials. In the TCA cycle, isocitrate is oxidized by isocitrate dehydrogenase (IDH) to ketoglutarate with the generation of NAD(P)H. Loss of NAD-IDH has been implicated as a potential causative factor in retinitis pigmentosa. Assay Genie's Isocitrate Assay Kit provides a simple, sensitive and rapid means of quantifying isocitrate in a variety of samples. In the assay, isocitrate is oxidized with the generation of NADPH which converts a nearly colorless probe to an intensely colored species with a ax of 450nm. The Isocitrate Assay Kit can detect 1 to 20 nmoles (~0.2-5 µg) of isocitrate. 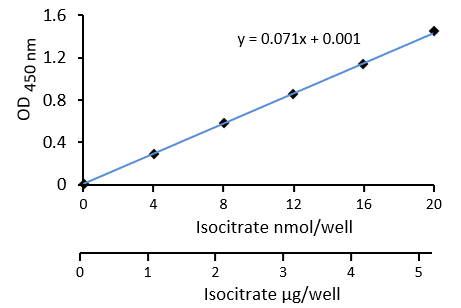 MSRP:
Now: €636
Was:
Isocitrate Assay Kit - InformationAssay Genie's isocitrate assay measures the NADPH generated from the oxidation of isocitrate. The NADPH converts the dye to an intense violet color with an...
BA0089

MSRP:
Now: €636
Was:
Isocitrate Assay Kit ISOCITRATE (ISOCITRIC ACID) is a substrate in the citric acid (TCA) cycle. Isocitrate is formed by the isomerization of citrate catalyzed by the enzyme aconitase...
BA0103

MSRP:
Now: €720
Was:
NADP/NADPH Quantitation Colorimetric Kit Assays of nicotinamide nucleotides are of continual interest in the studies of energy transforming and redox state of...
BN00611