Cystathionine Beta Synthase (EC 4.2.1.22, CBetaS) is a Pyridoxal 5-Phosphate-dependent enzyme that uses cysteine and homocysteine as substrates to catalyze the formation of H2S and cystathionine. CBetaS is well-known for its role in human sulfur metabolism. The overexpression of CBetaS has been implicated in Down Syndrome, and also results in homocystinuria; or low levels of homocysteine in blood. Homocystinuria leads to a mutli-systemic disorder of the connective tissue, muscles, and central nervous system (CNS). For that reason, pharmacological inhibitors of human CBetaS present attractive therapeutic potential in order to restore baseline CBetaS activity and blood homocysteine levels. It has been shown that aminooxyacetic acid (AOAA) is an irreversible inhibitor that targets the PLP-binding site of CBetaS. That interaction inhibits the transaminase reaction that would yield cystathionine and H2S in wildtype conditions. Assay Genie's Cystathionine Beta Synthase Inhibitor Screening Kit is the first available kit that enables customers to screen inhibitors of CBetaS and quantify their therapeutic potential. The kit has a simple, easy-to-follow protocol and is high-throughput adaptable. In this kit, the product hydrogen sulfide reacts with the non-fluorescent azido-functional group to yield a fluorescent amino group (Ex/Em = 368/460 nm). In the presence of AOAA, CBetaS activity is inhibited, which subsequently abolishes the production of H2S and thus the fluorescent signal is reduced. 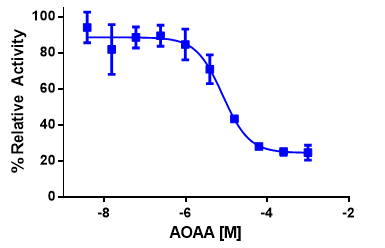 Figure: Inhibition of CβS activity by AOAA Inhibitor Control. IC 50 was determined to be 8.0 ± 0.11 µM. Assays were performed following the kit protocol.

MSRP:
Now: €756
Was:
Methanol Assay Kit (Colorimetric) Methanol is the simplest alcohol, consisting exclusively of a methyl group and a hydroxyl moiety. It is both an important...

MSRP:
Now: €786
Was:
DL-Serine Assay Kit (Fluorometric) Serine is one of the 20 naturally-occurring amino acids used by all organisms in the biosynthesis of proteins. Having a single...

MSRP:
Now: €696
Was:
D-Gluconate (D-Gluconic Acid) Assay Kit (Colorimetric) D-Gluconic acid (C6H12O7) is a mild organic acid that is produced from glucose by glucose oxidase. It is...