Cytochrome P450 3A4 (CYP3A4, EC 1.14.13.157) is a member of the cytochrome P450 monooxidase (CYP) family of microsomal xenobiotic metabolism enzymes. CYPs are membrane-bound hemeproteins responsible for Phase I biotransformation reactions, in which lipophilic drugs and other xenobiotic compounds are transformed to more hydrophilic products to facilitate excretion from the body. CYP3A4 is expressed in high levels in the liver and intestines, where it catalyzes oxidation of an extraordinarily wide variety of structurally distinct ligands. More than half of all small molecule drugs commonly used by humans are metabolized by CYP3A4 and inhibition of CYP3A4-mediated metabolism is a common cause of adverse drug/drug and drug/food interactions and toxicity. In addition, for drugs whose pharmacological activity requires metabolism from a pro-drug form, CYP3A4 inhibition can lead to decreased drug efficacy. Assay Genie's CYP3A4 Inhibitor Screening Kit enables rapid screening of drugs and other new chemical entities (NCEs) for compound-CYP3A4 interaction in a reliable, high-throughput fluorescence-based assay. The kit provides a yeast microsomal preparation of human CYP3A4 and cytochrome P450 reductase (CPR) enzymes. The assay utilizes a non-fluorescent CYP3A4 substrate that is converted into a highly fluorescent metabolite detected in the visible range (Ex/Em = 535/587 nm), ensuring a high signal-to-background ratio with little interference by autofluorescence. The concentration of fluorogenic substrate used for screening is roughly equivalent to its Km for CYP3A4, facilitating detection of weak competitive inhibitors. The kit contains a complete set of reagents sufficient for performing 200 reactions in a 96-well plate format. 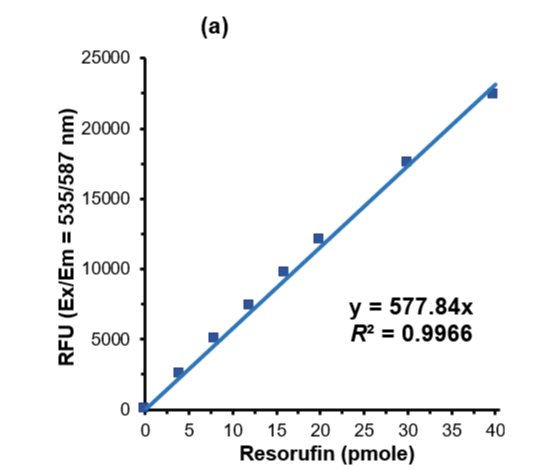 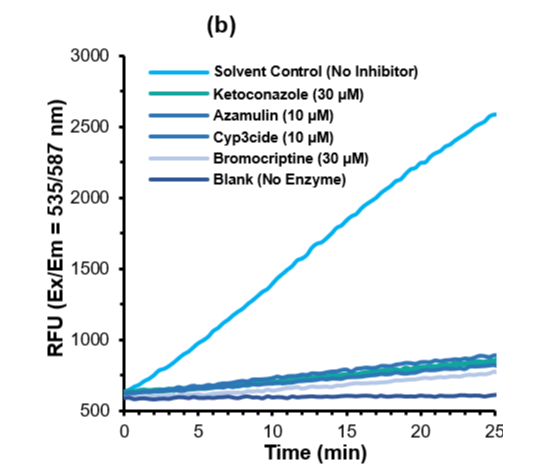 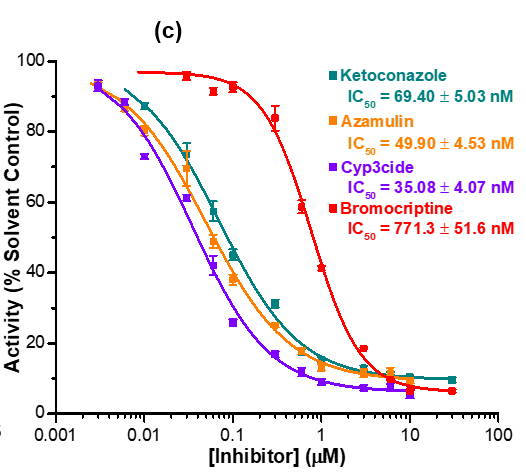 Figure: (a) Resorufin standard curve. One mole of resorufin corresponds to the metabolism of one mole of CYP3A4 substrate. (b) Reaction kinetics of recombinant human CYP3A4 enzyme at 25°C in the presence and absence of the indicated CYP3A4 inhibitors (the solvent control reaction contained a final concentration of 0.7% acetonitrile). (c) Dose-response curves for various CYP3A4 inhibitors of differing structural and mechanistic classes: the canonical competitive CYP3A4 inhibitor Ketoconazole, the selective mechanism-based CYP3A4 inhibitors Azamulin and cyp3cide (PF-4981517), and bromocriptine, a CYP3A4 substrate that acts as a weak enzyme inhibitor. For dose-response curves, percent activity was calculated for each concentration of inhibitor by comparison to activity of reactions containing no inhibitor. For each CYP3A4 inhibitor, IC50 values were derived by 4-parameter logistic curve fitting and represent the mean ± SEM of at least three replicate experiments. Assays were performed according to the kit protocol.