Transmission of SARS-CoV-2 (COVID-19) via Droplets and Aerosols

COVID-19, the disease by the coronavirus, SARS-CoV-2, is currently causing a global pandemic. There is an overwhelming amount of research being done to provide a greater understanding of the disease and the virus that causes it.

It is known that the virus is transmitted through person-to-person contact via aerosolised droplets that can be produced through talking, coughing or sneezing. In order for the possibility of infection to occur, a person must be within 15 metres of an infected person for viral particles to be inhaled.

There are different types of particles that can be transmitted via person-to-person to cause an infection. Droplets that are produced directly from an infected person through coughing or sneezing are large and can remain in the air for a short period of time before settling due to gravity. The surfaces that the viral particles land on then become contaminated and can lead to infection if a person touches the surface and then touches their eyes, nose or mouth. 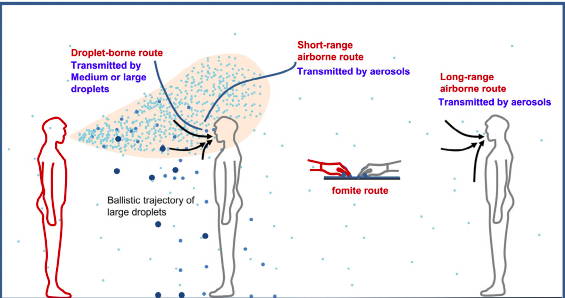 A study carried out by Anfinrud and others used laser light scattering to visualise speech-generated droplets and their trajectory. In order to do this, a laser was transformed into a light sheet. This light sheet was then directed through slits on the sides of a cardboard box. The interior of the box was painted black and the enclosure was positioned under a specific filter in order to eliminate dust.

Overall this study provided visual representation of speech-generated droplets and the effect of the amount emitted whilst wearing a mask. 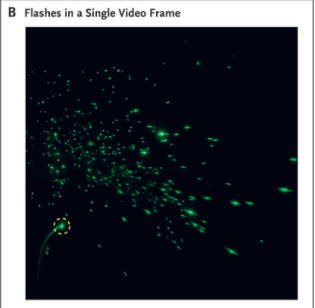 Fig 2: A visual representation of the amount of speech-generated aerosol particles when a person said "stay healthy". The green flashes correspond to each individual particle. Adapted from Anifrud et al. (source)

It has been documented that the inhaled droplets and aerosol particles have different sites of deposition in the recipient. Inhaled droplets produced by coughing or sneezing from an infected person are deposited in the upper regions of the respiratory tract. This includes the nose and the throat. If the viral particles remain in this region, the COVID-19 disease severity is said to be less due to the fact that the viral particles can be removed in nasal secretions and that there are fewer receptors that the virus can bind to in order to gain entry in to cells. The receptor that SARS-CoV-2 uses to gain entry in to alveolar epithelial cells is ACE2.

On the other hand, inhaled aerosol particles produced by talking or breathing can penetrate deeper into the lower regions of the respiratory tract which include the lungs. These viral particles can be deposited on the alveoli. These are tiny, balloon-shaped air sacs that are arranged in clusters throughout the lungs. Their main function is to exchange oxygen and carbon dioxide molecules to and from the bloodstream. Inhalation of aerosol particles containing the coronavirus, SARS-CoV-2 is noted to be more dangerous. This is due to the fact that there is a higher concentration of ACE2 receptors in the lungs, therefore, a greater chance of viral replication occurring leading to a more severe infection. Additionally, the alveoli are delicate structures, therefore viral infection of the cells can lead to severe destruction of the lung tissue.

It was found that SARS-CoV-2 was more stable on plastic and stainless steel, as viable virus was detected for up to 72 hours after application of the virus to these surfaces. SARS-CoV had the same duration period on the two surfaces. Both SARS-CoV-2 and SARS-CoV had similar duration periods on copper and cardboard after application of the virus. On copper, there was no viable SARS-CoV-2 was measured after 4 hours, and no viable SARS-CoV was measured after 8 hours on the same surface. On cardboard, it was found that SARS-CoV-2 had a longer duration period compared to SARS-CoV, as viable virus was found on the surface at 24 hours. SARS-CoV only remained on cardboard for 8 hours. In general, however, the duration time of both viruses on the four surfaces were quite similar.

When studying the difference in aerosols stability of the two viruses it was discovered that the viral particles of both SARS-CoV and SARS-CoV-2 could survive in the air for approximately 2-3 hours. Based on this information, it is clear that the form of transmission of SARS-CoV-2 is associated with nosocomial spread and super-spreading events. This indicates that measures such as social distancing and self-isolation when infected or being in contact with an infected person are vital for reducing the aerosol transmission of the coronavirus, SARS-CoV-2.