COVID-19 the disease caused by the coronavirus named SARS-CoV-2 has caused the current COVID-19 global pandemic. This virus is spread via aerosolised droplets that can be produced via coughing or sneezing. In most cases, it causes mild to moderate symptoms including a cough, a fever, shortness of breath or breathing difficulties. However, in more severe cases, it has a greater impact causing pneumonia, acute respiratory distress syndrome and possible multi-organ failure.

During a viral infection, the main cells involved in viral detection and elimination are neutrophils, dendritic cells, natural killer (NK) cells and cytotoxic T cells. Once the virus infects the host, molecules on its surface or intracellularly called PAMPs are recognised by neutrophils or dendritic cells. These can then send signals in the form of chemokines to recruit other cells to the site of infection. These include NK cells. NK cells use their surface receptors to detect foreign molecules in the body such as viruses. Dendritic cells are also recruited to the site of infection via chemokines and cytokines. They also detect viruses and can activate T cells that specifically recognise the virus based on its surface material. This is called antigen processing and presentation. The T cell can then differentiate into cytotoxic t cells which are essential cells during viral infection. 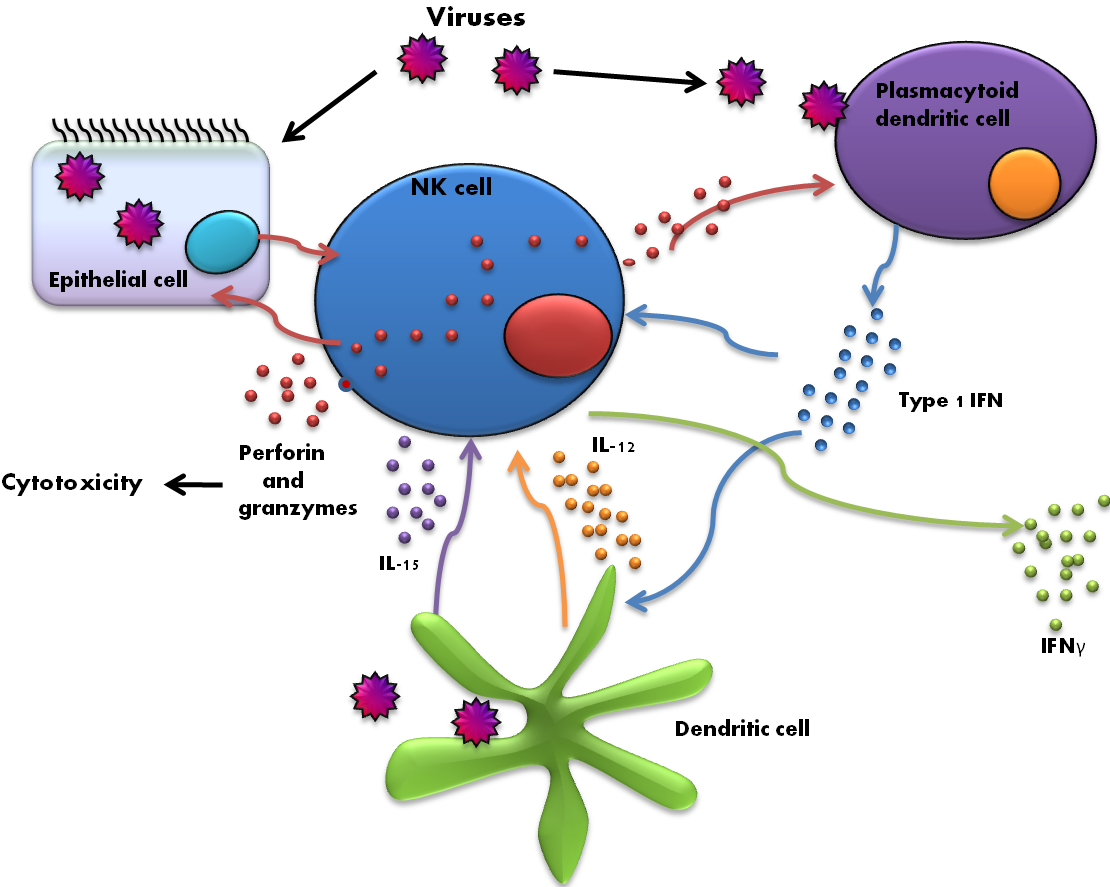 From carrying out clinical research on patients that have been infected by coronavirus causing COVID-19, it was noted that in a report in Wuhan with 99 infected patients, there was a 38% increase in neutrophils, a 35% decrease in total lymphocytes (white blood cells), a 52% increase in the cytokine IL-6 in serum and 84% increase of c-reactive protein. This indicated that a cytokine storm, a condition in which there is an uncontrolled release of pro-inflammatory cytokines which cause major tissue damage and the shutdown of organs, occurred. It was also found that in a separate study the immune cell profile of patients that suffered a mild disease compared to a severe disease differed. It was found that increased COVID-19 severity was characterised by an increased neutrophil count and a decreased lymphocyte count. The major lymphocytes that were decreased were CD4+ and CD8+ T cells which are specialised T cells involved in the adaptive immune response.

The pathophysiology of SARS-CoV-2 infection is associated with aggressive inflammatory responses strongly implicated in the resulting damage to the airways. Therefore, disease severity in patients is due to not only the viral infection but also the host response.

Additionally, acute respiratory distress syndrome (ARDS) is seen in severe COVID-19 and is caused by the build-up in fluid in the alveoli of the lungs. This prevents the lungs from inhaling enough oxygen and deprives the bloodstream of oxygen thereby reducing the amount of oxygen reaching other organs of the body. It is characterised by difficulty in breathing. ARDS may lead directly to respiratory failure, which is the cause of death in 70% of fatal COVID-19 cases. In addition, the vast release of cytokines by the immune system in response to the viral infection can result in a cytokine storm and symptoms of sepsis that are the cause of death in 28% of fatal COVID-19 cases. In these cases, uncontrolled inflammation causes multi-organ damage leading to organ failure, especially of the cardiac, hepatic and renal systems.

The infection caused by SARS-CoV-2 leads to the destruction of lung cells which triggers a local immune response. This response is characterised by the recruitment of macrophages and monocytes to the site of infection. These cells stimulate the release of cytokines and prime adaptive T and B cell immune responses. In milder cases of COVID-19 this process is capable of resolving the infection. However, in more severe cases, a dysregulated immune response occurs, which can cause severe lung and possible systemic pathology.

When SARS-CoV-2 infects the host, it induces death and injury of host cells and tissues due to the viral replicative cycle. Viral infection and replication in airway epithelial cells is linked to more severe levels of virus-linked pyroptosis. Pyroptosis is a highly inflammatory form of programmed cell death. The cell damage and death caused by the virus is a likely reason for the subsequent inflammatory process. This is supported by the elevated levels of IL-1β, IL-6, IFNγ, CCL2 and IP-1 seen in patients with severe COVID-19 disease. 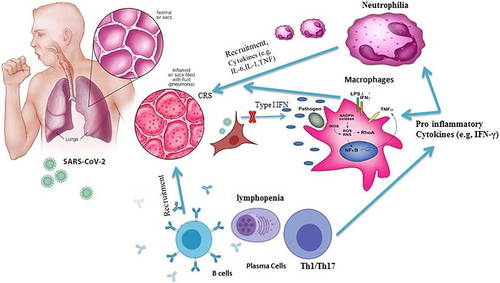 Fig 2: Host immune responses during SARS‐CoV‐2 infection. SARS‐CoV‐2 leads to infection of ACE2 expressing target cells cells. Cells infected by the virus may escape IFN I resulting in uncontrolled viral replication. The recruitment of neutrophils and monocytes/macrophages is by chemotaxis of pro‐inflammatory cytokines. Presentation of viral peptides by dendritic cells primes SARS-CoV-2 specific T and B cells. Taken from Rokni et al., 2020.

Both T and B cell responses against SARS-CoV-2 are detected in the blood of infected patients around one week after the onset of COVID-19 symptoms. CD8+ T cells are necessary for directly attacking and killing viral-infected cells, whereas CD4+ T cells are essential for priming both CD8+ T cells and B cells. CD4+ T cells are also responsible for cytokine production which stimulates the recruitment of immune cells to the site of infection.

A study that examined the first autopsy of a patient with COVID-19 revealed an increase in monocytes and T cells in the lungs with lower levels of activated T cells in the peripheral blood. Other studies that looked at a variety of patients with severe COVID-19 disease found that lymphopenia (reduction in white blood cells) and reduced peripheral T cell levels were common among these patients. These reports suggest that T cells are attracted away from the blood and into the lungs, the primary site of infection, to control viral infection.

When comparing the immune cell profile of patients infected with SARS-CoV, it was found that there was an increase of CD4+ T cells that expressed the cytokines IFNγ, TNF and IL-2. This suggests that patients with SARS-CoV infection exhibit a Th1 cell response and mainly use cellular immunity to control infection. Although a Th1 cell response to infection is highly pro-inflammatory, depletion of CD4+ T cells in SARS-CoV infected mice resulted in slower clearance of the virus from the host and more severe lung inflammation.

B cell responses in patients with COVID-19 occur simultaneously with T helper cell responses, from around 1 week after symptom onset. In patients with SARS-CoV infection, B cell responses are activated firstly against the nucleocapsid (N) protein of SARS-CoV-2. Within 4–8 days after symptoms present, antibody responses against the spike (S) protein of the virus are found. Neutralising antibody responses, mainly to the S protein, begin to develop by week 2 of infection onset and most patients develop neutralising antibodies by week 3

It was reported that viral concentration in patients infected with SARS-CoV-2 peak earlier than for SARS-CoV. This may indicate that antibody responses may also arise earlier.

Although precise antibody mediated mechanisms against providing immunity against SARS-COV-2 have yet been fully elucidated, neutralisation of the virus is presumed to be an important mechanism of action for antibodies.

The two main types of antibodies produced against surface proteins of SARS-CoV-2 are IgG and IgM. Early studies suggest the production of these antibodies in COVID-19 patients typically occurs between 7 and 11 days after exposure, with IgM antibodies appearing first, followed by IgG antibodies

In SARS-CoV, the primary target of neutralizing antibodies is the receptor binding domain 122 (RBD122) of the spike (S) protein, which is the viral protein that is used to mediate entry into host cells via the host receptor ACE2. When testing previously identified anti-SARS-CoV monoclonal antibodies against SARS-CoV-2, it was found that whilst a small minority were able to bind and neutralize SARS-CoV-2, the majority did not. This could be due to the differences in the receptor binding domains of SARS-CoV-2 and SARS-CoV.

Researchers are testing the use of donated blood from people who have recovered from COVID-19 as a treatment for people with severe coronavirus disease 2019 (COVID-19). Those that have recovered from COVID-19 have antibodies such as IgG and IgM against SARS-CoV-2 in their blood. This is called convalescent plasma. By giving convalescent plasma to people with severe COVID-19 disease, it has the ability to boost their immune system to fight the virus.

In China, hospitals have initiated the use of convalescent plasma therapy as a source of therapeutic polyclonal antibodies for treatment of COVID-19, and early data suggests that the therapy results in a decrease in respiratory viral load and mortality. The antibodies within convalescent plasma from patients who have recovered from COVID-19 aid in neutralizing SARS-CoV-2 and eradicating the pathogen from blood circulation and pulmonary tissues.

A study was carried out whereby convalescent plasma derived from recently recovered COVID-19 donors was given to 10 patients with severe COVID-19 disease to aid in eliminating or reducing infection in the patients. The results conveyed that there was an increase in oxygen saturation and lymphocyte counts, and an improvement in liver function and C-reactive protein. These results suggest that the inflammation and exacerbation of the immune system was improved by antibodies contained in the convalescent plasma.