The immune system is the body’s main defence against infection. In order to function properly, the immune system must be able to detect and protect against infinite agents such as pathogens including viruses and bacteria and unhealthy or infected cells. In order to do this, various cells are required to carry out specific functions. In the article below, an overview of dendritic cells will be discussed including their development and functions.

What is a Dendritic Cell?

Dendritic cells (DCs) are a type of immune cell that acts as a messenger between the innate and adaptive immune system. They are professional antigen presenting cells (Wikipedia Contributors, 2020) They are similar to macrophages in that they use PRRs to recognise pathogenic molecules called PAMPs on the interior or exterior of the microbe, and phagocytose these pathogens. They then present a small part of the microbe called an antigen to a subset of immune cells called T cells. This leads to the overall activation of the immune system and the specialised killing of distinct microbes (Vyas, 2012). They can capture, process and present antigens on the surface of their cell. DCs can recognise pathogens, tissue damage signals and tumour antigens.

They present these antigens with molecules called major histocompatibility complexes (MHC) which can be divided into MHC-1 and MHC-2. MHC-1 recognises internal pathogens, whereas MHC-2 recognises external pathogens (Vyas, 2012). Once they have processed the antigen through the specific pathway based on whether or not the pathogen infected the cell externally or internally, they present this antigen to T cells on their MHC receptors. Dendritic cells can be found in virtually any tissue, and can detect homeostatic imbalances and can secrete a variety of pro-inflammatory molecules and growth factors (Mellman, 2013). 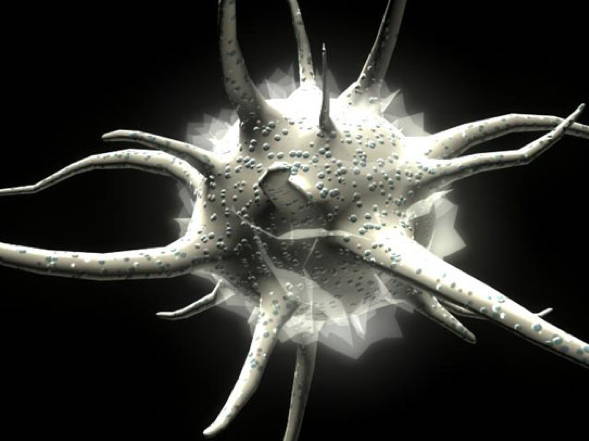 DC’s are found in two different states, mature and immature. When they are immature, they are not specialised and cannot recognise, process and present antigens to their respective cells. In order to become mature, their pattern recognition receptors (PRRs) need to be activated by various PAMPs. Additionally, the expression of receptors on their cell surface called co-stimulatory molecules need to be increased, in addition to chemokine receptors (Vyas, 2012).

DC’s are produced in the bone marrow and mature in the lymphoid and peripheral tissues until they are activated and migrate to the site of infection. The development of immature DCs to mature DCs requires the stimulation of several types of cytokines, chemokines and pathogen associated molecular patterns (PAMPS) (Hellman & Eriksson, 2007). Activation of DC’s can be recognised by MHC class II, B7-1/CD80, B7-2/CD86, CD40/TNFRS5 and CD83 expression. Additionally, dendritic cells secrete different cytokines based on the type of immune response that needs to be induced. For example, the production of TNF-alpha leads to the activation of the effector T cell, CD8+ T cell and Th1. Whereas, the production of IL-4 induces the activation of Th2 cells, and increased expression of TGF-beta stimulates the differentiation and activation of Treg cells (Nunez, 2001).

Additionally, in order for effective proliferation to occur, DC’s require the exposure to GM-CSF (granulocyte macrophage - colony stimulating factor) to activate and differentiate from their progenitor cell. Another growth factor important for DC differentiation is FLT3-L which can be measured using an ELISA kit to determine the level of DC activation and differentiation in a sample. Additionally, it has been noted that FLT3-L has a role in the development of DC’s in mucosal and lymphoid tissues (Hellman & Eriksson, 2007).

DCs can be subdivided into pDCs (plasmatoid DCs) and cDCs (classical DCs). cDCs are the more abundant subset found in the body and can be found in all tissues and in the circulatory system (Ueno et al., 2007). They express high levels of both MHC Class I and MHC Class II and are the conventional professional antigen-presenting cell. The role of cDCs is to survey the host based on environmental stimuli that manifest in the form of phenotypic changes (Ueno et al., 2007). pDCs are a smaller subdivision of dendritic cells and are found circulating in the blood and lymphoid tissues and reside in the lymph nodes. They have a much lower expression level of MHC Class II and costimulatory molecules, however upon recognition of foreign nucleic acid, they produce huge amounts of type 1 interferon which allows them to present foreign antigens to T cells (Ueno et al., 2007).