A Guide to Apoptosis

At Assay Genie we have created a comprehensive guide outlining everything you need to know about apoptosis!

Jump to a section:

Apoptosis is a type of cell death that occurs when the cell's apoptotic program is activated. This program is a set of instructions that are encoded in the cell's DNA. When apoptosis is triggered, the cell goes through a series of changes that ultimately lead to its death. 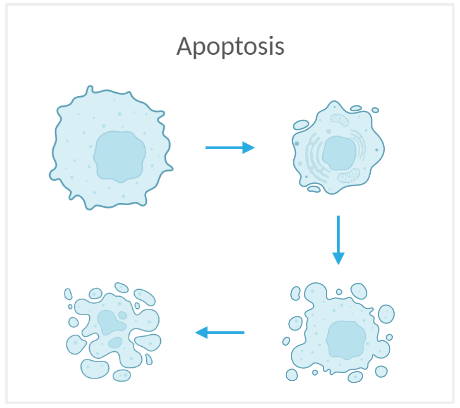 Once apoptosis is underway, it is irreversible and the cell cannot be saved. Apoptosis is a normal process that happens in our bodies all the time. For example, it is responsible for getting rid of old, damaged, or unneeded cells. apoptosis is also a key player in development and immunity.

Apoptosis is a type of programmed cell death that occurs in response to various stimuli, such as DNA damage or viral infection. Apoptosis is characterized by several morphological changes, including cell shrinkage, plasma membrane bulging (known as blebbing), chromatin condensation, and formation of apoptotic bodies.

Necrosis, on the other hand, is a type of cell death that occurs in response to extreme stress, such as exposure to toxins or infection. Necrosis is characterized by cell swelling, membrane rupture, and release of inflammatory mediators. 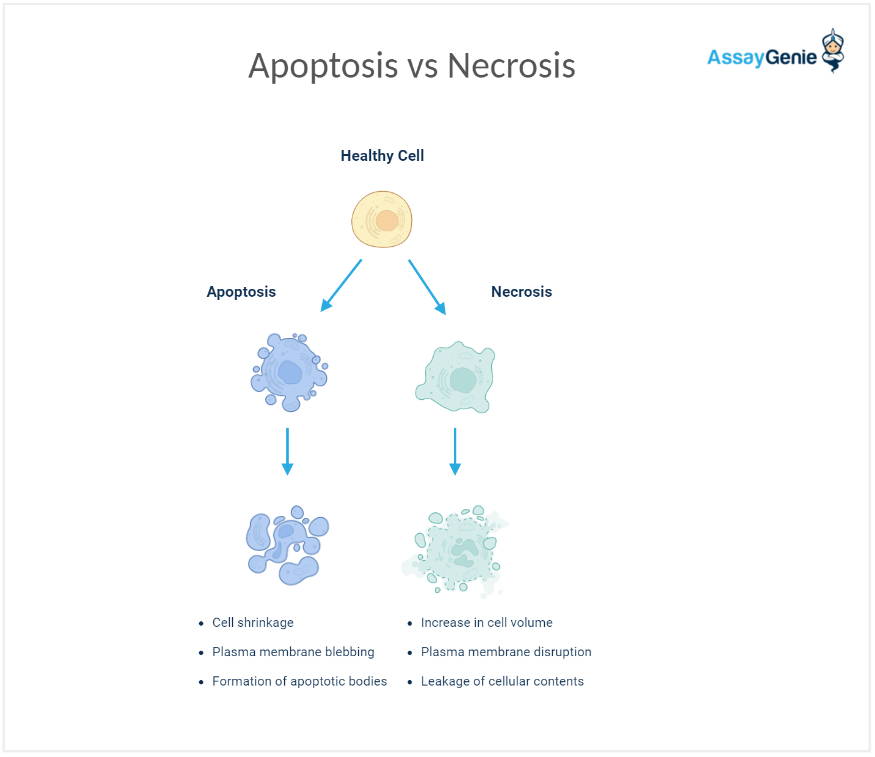 As one of the most important tumor suppressor proteins, p53 is frequently mutated or lost in cancer cells. This can lead to uncontrolled cell growth and eventually tumor formation. p53 also plays a key role in apoptosis, or programmed cell death. When DNA is damaged, p53 is activated and triggers apoptosis to prevent the damaged cells from dividing and spreading.

There are several signaling proteins involved in p53-mediated apoptosis, including Bax, Bak, and Bad. Bax and Bak are pro-apoptotic proteins that promote cell death, while Bad is an anti-apoptotic protein that inhibits cell death. When DNA damage occurs and p53 is activated, Bax and Bak are recruited to the mitochondria, where they cause the release of cytochrome c. Cytochrome c triggers a cascade of events that leads to cell death. Bad is also phosphorylated by p53, which prevents it from inhibiting cell death.

Intrinsic apoptosis is a process that is initiated from within the cell, often in response to cellular stressors such as DNA damage. Extrinsic apoptosis, on the other hand, is triggered by external signals from other cells. Apoptosis is a key mechanism in maintaining cell homeostasis and preventing the development of diseases such as cancer. 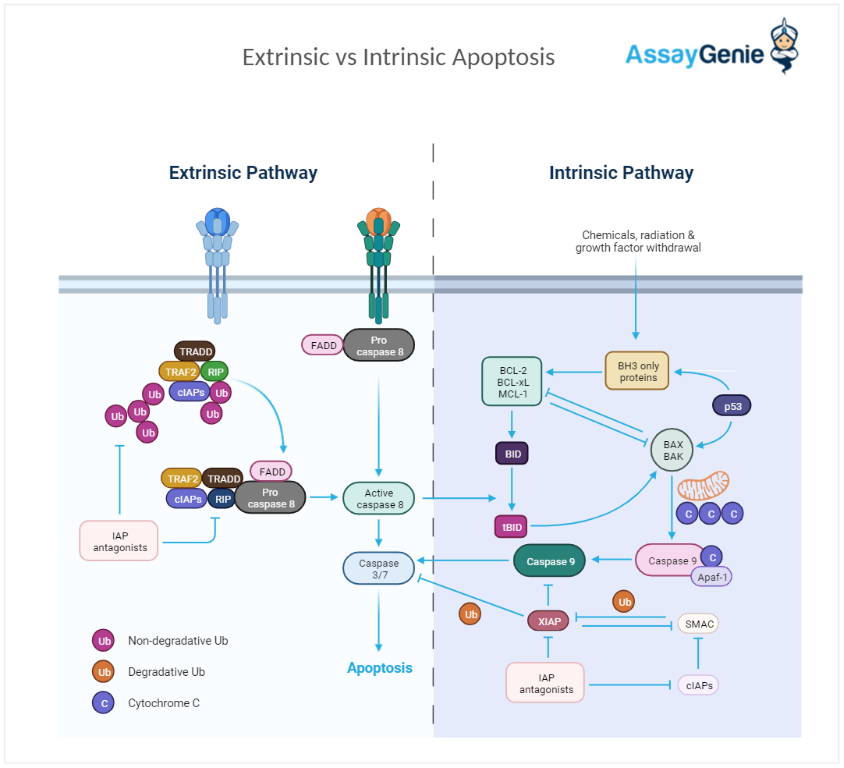 The extrinsic pathway of apoptosis is initiated either by an extracellular signal which activates a death receptor (e.g. Fas, TNF), or by the release of Granzyme B and perforin from cytotoxic lymphocytes as part of the innate immune response to infection (Goping et al., 2003). Activation of the death receptors leads to their oligomerisation and recruitment of the cytosolic adaptor proteins (e.g. FADD, TRADD), facilitating the assembly of the death-inducing signalling complex (DISC), which is comprised of the death receptors and associated adaptor proteins in conjunction with procaspase-8 (Ashkenazi et al., 1998).

The extrinsic pathway of apoptosis is mediated by death receptors (DRs) belonging to the tumour necrosis factor (TNF) receptor superfamily. Members of this family include, TNFR1, CD95 /Fas, TRAIL-R1/DR4 and TRAIL-R2/DR5 (Itoh et al., 1991; Pan et al., 1997; Tartaglia et al., 1993). These receptors are commonly expressed on the surface of cells as homotrimeric type I transmembrane proteins and are characterised by the presence of cysteine rich extracellular domains (Ashkenazi and Dixit, 1998). Death receptors also contain a cytoplasmic domain of about 80 amino acids which is referred to as a death domain (DD), which plays a vital part in transmitting the death signal from the cells surface to intracellular signalling pathways.

Upon activation caspase-8 can propagate the apoptotic signal by cleavage of further downstream effector caspases such as caspase-3 (Medema et al., 1997; Murphy et al., 2004). However, it has also been reported that caspase-8 can be activated in similar manner to caspase-9 where processing is not required and caspase-8 is activated by dimerisation (Boatright et al., 2003; Donepudi and Grutter, 2002).

Under some conditions caspases-8 cannot directly activate downstream caspases and hence there have been two cell types described both of which utilise the CD95 receptor /ligand complex (Scaffidi et al., 1998). In what have been termed type I cells, death is instigated by large amounts of active caspase-8 produced at the DISC, resulting in the direct cleavage of caspase-3 prior to loss of mitochondrial transmembrane potential. In comparison in the type II cells the activation of the death receptor pathway alone is insufficient to induce apoptosis. In these cells little DISC is formed and hence smaller amount of active caspase-8 is available and thus the apoptotic signal requires amplification by the simultaneous engagement of the mitochondrial pathway.

This pathway is carried out by caspase-8 mediated cleavage of a BH3-domain-containing Bcl-2 family member Bid. Active caspase-8 cleaves Bid to produce a truncated form (tBid), which either alone or in combination with other molecules induces mitochondria to release pro-apoptotic factors such as cytochrome c resulting in the formation of the apoptosome complex (Li et al., 1998; Luo et al., 1998).

MOMP stands for mitochondrial outer membrane permeabilisation. The process of apoptosis is mediated through the regulation of MOMP by pro-apoptotic and anti-apoptotic members of the Bcl-2 family of proteins (Green et al., 2004). MOMP is the point of no return where cells become irreversibly committed to cell death (Tait et al., 2010), and causes release of apoptogenic proteins such as cytochrome C, endoG, Smac/DIABLO, AIF-1, and Omi/HtrA2 from the intermembrane space into the cytoplasm.

Cytochrome C release into the cytoplasmic compartment leads to its interaction with Apaf-1, allowing the cleavage of procaspase-9, the formation of the Apaf-1/caspase-9 apoptosome complex, and the subsequent activation of effector caspases (Li et al., 1997; Zou et al., 1999). The fate of the cell is ultimately thought to be determined by the relative abundance and activity of the opposing Bcl-2 proteins.

Bcl-2 family proteins are key regulators of apoptosis. All family members share homology with the archetypal member of the family, B-cell lymphoma-2 protein (Bcl-2), which contains four Bcl-2 homology domains classified BH 1-4. Bcl-2 family proteins can be functionally subdivided into pro-apoptotic and anti-apoptotic members. Pro-apoptotic Bcl-2 proteins may be further subdivided into 2 groups based on structure and function, as either BH3-only or multidomain members.

Bax and Bak function by forming homo- or hetero-dimeric pores in the outer mitochondrial membrane (MOMP) and catalysing the release of apoptogenic factors into the cytosol. Recent reports indicate that Bid, Bim, and PUMA are the primary activators of Bax/Bak dimerisation, with the other BH3-only proteins acting in a facilitatory fashion (Kim et al., 2006). Anti-apoptotic Bcl-2 members all possess BH domains 1-4, and all except Bcl-2A1 have a transmembrane region. Anti-apoptotic members act to prevent the formation of Bax/Bak dimers. The primary function of pro-apoptotic Bcl-2 proteins, therefore, is to form stable heterodimers with, and thus sequester, the anti-apoptotic members of the family, allowing Bax/Bak dimerisation and subsequent MOMP formation.

The BH3-only protein, Bad, was originally identified as Bcl-XL interactor through yeast two-hybrid and -phage library screens, and was found to selectively dimerise with Bcl-2 and Bcl-XL, but not Mcl-1 [Yang et al., 1995]. In the presence of the survival factor, IL-3, Bad becomes phosphorylated by the Ser/Thr kinase, Akt, resulting in its binding to the 14-3-3 proteins, thus inhibiting its apoptotic function [Datta et al., 1997; Zha et al., 1996]. Phosphorylation of Bad by Cdk1 in post-mitotic neurons results in the dissociation of Bad from 14-3-3 proteins and subsequent cell death [Konishi et al., 2002].

The BH3-only protein Bim has been extensively characterised as a mediator of intrinsic cell death pathways. Following cellular stresses such as UV irradiation, Taxol treatment and serum growth factor withdrawal, Bim localises to the mitochondria and inhibits the anti-apoptotic members of the Bcl-2 family, Bcl-2, Bcl-XL and Mcl-1 and activates Bak and Bax resulting in MOMP and subsequent cell death [Kutuk and Letai, 2010].

Caspases can be classified into 3 different groups on the basis of their substrate specificity or length of their pro-domain (Grutter, 2000; Thornberry and Lazebnik, 1998). Group I caspases function primarily as mediators of inflammation and include caspases -1, -4, -5, -11 and -14. They are involved in the activation and processing of pro-inflammatory cytokines and appear not to have a main role in apoptosis. The Group I caspases prefer bulky hydrophobic residues in the P4 position, such as tyrosine or tryptophan. (Nicholson, 1999; Thornberry et al., 1997).

Caspase 3 and 7 are two key apoptotic enzymes that work together to initiate cell death. Caspase 3 is responsible for cleaving proteins that lead to cell death, while caspase 7 activates caspase 3. Both of these enzymes are activated by pro-apoptotic signals, which can be triggered by a variety of stimuli, including DNA damage, oxidative stress, and apoptotic hormones. Once activated, caspase 3 and 7 work together to cleave a variety of cellular proteins, ultimately leading to cell death.

Caspase 3/7-mediated apoptosis is a critical process that helps to maintain tissue homeostasis and prevent the development of cancer. apoptosis is a type of programmed cell death that occurs in response to various stimuli, including DNA damage, oxidative stress, and apoptotic hormones. Caspase 3 and 7 are two key enzymes that work together to initiate apoptosis. Caspase 3 cleaves proteins that lead to cell death, while caspase 7 activates caspase 3.

Apoptosis is a critical process that helps to maintain tissue homeostasis and prevent the development of cancer. Caspase-mediated apoptosis is one type of programmed cell death that occurs in response to various stimuli, including DNA damage, oxidative stress, and apoptotic hormones.

Caspase 8 is an important regulator of apoptosis, and its activation is essential for the initiation of cell death. When apoptosis is triggered, caspase 8 cleaves and activates downstream proteins that lead to cell death. The caspase 8 cleavage site is located at amino acid Asp315, which is within the DEVD motif.

This cleavage site is essential for the activation of caspase 8 and subsequent apoptosis. Caspase 8 signaling leads to the activation of several downstream apoptotic proteins, including caspases 3, 6 and 7. These proteins then execute cell death by causing DNA fragmentation and cell shrinkage.

Caspase 9 is an important initiator caspase in the apoptotic pathway. It is activated by proteolytic cleavage at specific sites, which results in the release of its active catalytic domain. This then leads to the formation of an apoptosome, a key complex in the initiation of apoptosis.

Caspase 9 is activated by proteolytic cleavage at Asp-315 and Asp-330, which are located in the linker region between the large and small subunits. This results in the release of the active catalytic domain, which then goes on to form an apoptosome. The apoptosome is a key complex in the initiation of apoptosis, and is composed of caspase 9, caspase 3, and pro-apoptotic proteins such as cytochrome c.

When caspase 9 is cleaved at Asp-315, it results in the formation of an active tetramer that is capable of binding to and cleaving caspase 3. This results in the activation of caspase 3, which then leads to the proteolytic cleavage of a number of key proteins involved in cell death. 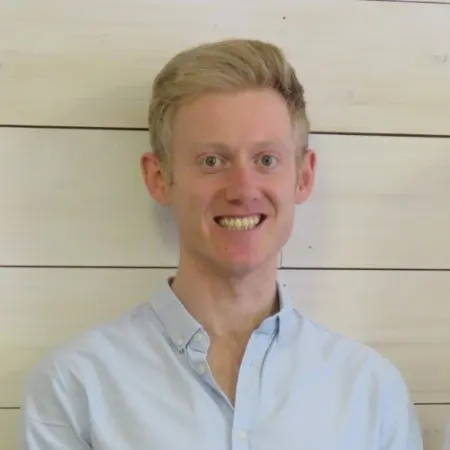